July 24, 2018
July's Owlcrate theme was Strange & Unusual and this box was filled with so many goodies! 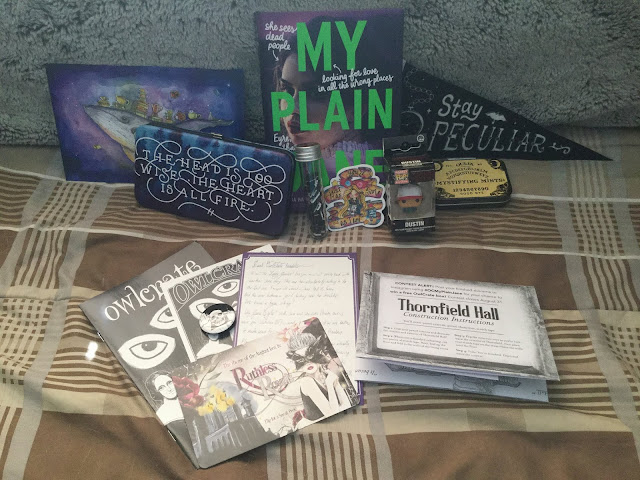 To start we have a Funko Pop keychain from Stranger Things, and mine was Dustin! Next, we have a box of mints that's Ouija Board inspired with the mints in the shape of the Ouija Board planchette. After that, we have a little thing of pushpins in the shapes of skulls to go with the creepy theme. The Raven Cycle item, which I was really excited for, is a wallet with the quote "The head is too wise, the heart is all fire." on it. A Miss Peregrines inspired pennant was included with the words "Stay Peculiar" on it, and under that in the box was an art print featuring a whale floating through the sky with books and such on his back. Lastly was a Harry Potter inspired item which I just love, and it's a Luna Lovegood sticker that's printed with the quote "Don't worry. You're just as sane as I am."

To finish up the book of the month was My Plain Jane by Cynthia Hand, Brodi Ashton, and Jodi Meadows, which is a retelling of Jane Eyre but with ghosts. This book had an exclusive dust jacket and was signed by the author, and also came with a little Thornfield Hall diorama for you to color in. As always there was the Owlcrate newsletter, the spoiler card, a letter from the author, the pin of the month, and the spoiler card for next months theme, which is Ruthless Royals.

That was the July 2018 unboxing of the Strange and Unusual Owlcrate box, so until next time I'll see you in the comments!

Popular posts from this blog

I was provided with a complimentary copy of this book so I could give an honest review.
The description of this book seemed to be so interesting to me. I mean like a teenage necromancer/assassin fits the description of an ideal book for me, but this one did not.
I started reading it and was a bit reluctant at first because I wasn't used to the author's style and I hoped it would get better, but it just didn't. I found the plot to go everywhere and also nowhere at all because the characters would go from place to place without any transition, but it really felt like it was all stationary. I read the whole thing in one sitting and found that I really didn't even know what was going on really.
When it came to the characters and story content I found it hard also because it felt to me like it was very basic and stereotypical. The girl was sassy and super cool like every other YA fantasy and the guy was laid back and athletic, and they just didn't mix well for me.
I al…
Read more

September 09, 2017
So I just recently finished reading Godsgrave by Jay Kristoff, which is the second book in the Nevernight Chronicle. This book left me not okay and I was basically ruined at the end but in a good way. I absolutely loved the first one and it's one of my favorite books of all time now. I read the first book in August, so once I finished it and heard the second was coming out the next month I was so excited, but now that I need to wait a year for the next one is killing me! Anyway, let's get onto the review!
I'm gonna start off with one thing that's huge, our main character being Bi! And not only that, might I add that her dad was gay which is equally awesome! I love the way Jay could just casually slide it in and not make a big deal about it but still give representation to the LGBTQ+ community.
In the first book, I loved how the storyline jumped back and forth from past to present and the scenes went together and I'm really glad that it was brought back again in t…
Read more

For the month of June there's only three books that I'm looking forward to.

First and foremost is Ghosts of the Shadow Market By Cassandra Clare with Sarah Rees Brennan, Maureen Johnson, Kelly Link, and Robin Wasserman. This is a collection of short stories following Brother Zachariah from the various Shadowhunter books. I love all the stories from the Shadowhunters universe and I can't wait to see the stories of Brother Zachariah. This is going to be released on June 4th.


On June 25th, DEV1AT3 by Jay Kristoff is being released. This is the second book following LIFEL1K3, which takes place in a dystopian future of the United States where a girl finds the remains of an android boy named Ezekiel. I'm a huge fan of Jay's writing style and the worlds that he creates and I can't wait to see how he expands upon the ending of the last book.

The final book I'm looking forward to also comes out on June 25th, and it is Wicked Fox by Kat Cho. This book follows Gu Miyou…
Read more

The Poppy War
by R.F. Kuang